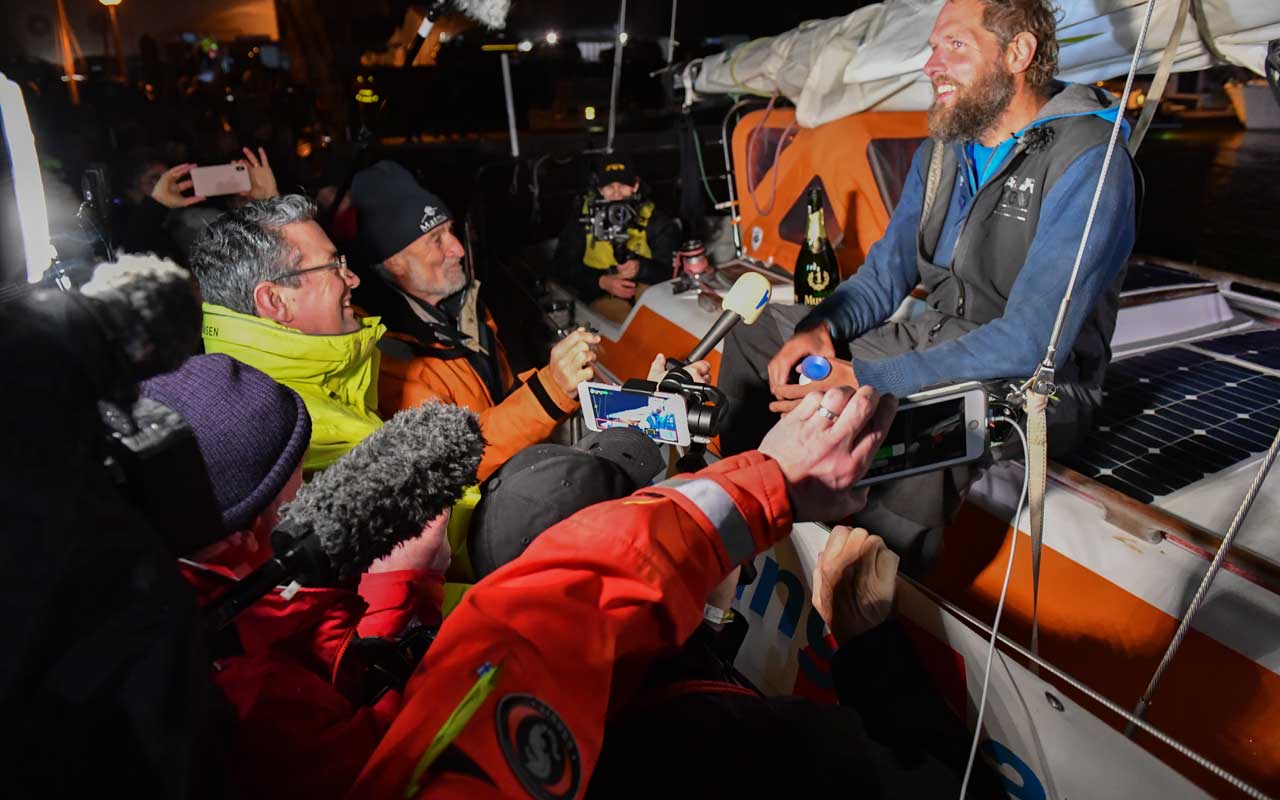 Arrived at 22:18:30 UTC to a rousing welcome in Les Sables d’Olonne

42-year old Dutch sailor Mark Slats and his Rustler 36 Ohpen Maverick took second place overall in the 2018 Golden Globe Race last night, and despite the late hour, received a rousing welcome from Dutch, French and British supporters there to applaud his super-human efforts in trying to overhaul race winner Jean-Luc Van Den Heede back up the Atlantic Ocean.

Slats, a record breaking Atlantic rower, was challenging for the lead from the start, but a tactical decision to follow the traditional clipper ship route on a wide sweep round the western side of the South Atlantic, left him at a 900 mile disadvantage to his French rival by the time he had reached the Cape of Good Hope. Van Den Heede then extended that lead to 2,000 miles through the Southern Ocean before his yacht Matmut, another Rustler 36, was pitch poled some 1,900 miles west of Cape Horn which left the Frenchman with a damaged mast to nurse for the rest of the circumnavigation.

That gave Slats an opportunity – which he grasped with both hands. By the time he rounded Cape Horn, the Dutchman had regained 500 miles, and by the time they had reached the Azores, the difference between them in terms of distance to finish was less than 50 miles. That was when Slat’s luck ran out. Questions over the validity of his Ham radio licence, left him ostracised by the amateur net and without regular weather updates at a critical period.

There were also issues with Van Den Heede’s Ham licence but as he put it when talking to Slats on the dock, ‘I had a few French friends who kept broadcasting to me’. He was soon 400 miles ahead again and kept this cushion to the finish.

For Slats, the most frightening moments came in the Indian Ocean when caught in the same 60-70 knot storm that put paid to Ireland’s Gregor McGuckin and Indian Abhilash Tomy’s challenges. ‘We agreed to keep in radio contact every 3 hours’, recalled Slats. ‘We spoke to each other on the first two scheds. but there was no one there for the third. I learned later from race HQ that they had both capsized and lost their rigs’.

The full force of that storm hit Ohpen Maverick soon after and she suffered two major knockdowns. During the first, Slats was thrown overboard and saved only by his lifeline, which catapulted him back on to the cockpit floor.

It was a massive knockdown through 120°, then I suffered another which filled the boat right up to the level of the nav station. That’s when I began to pray – and they were obviously answered because after pumping by hand for an hour, and with two electric pumps working, I managed to get the boat dry.

You have my respect for a very difficult voyage well accomplished. To be second to Jean Luc is to be at the highest level of solo sailing. A fantastic performance.

Click here to read the timeline of how the race played out.