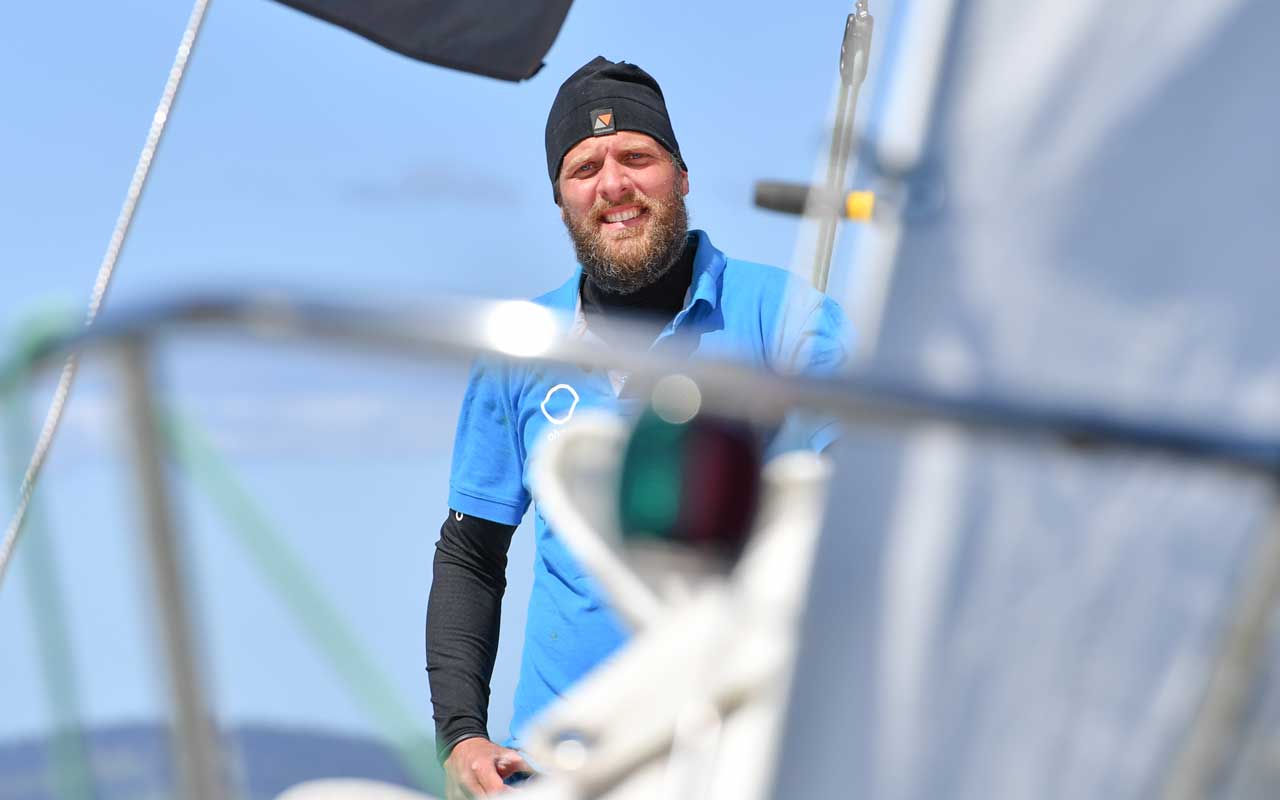 French race leader Jean-Luc Van Den Heede served out his 18 hour penalty (for improper use of his satellite phone) on Saturday and is now clear to race the remaining 2,150 miles to the finish at Les Sables d’Olonne. He expects to arrive there on 26th January.

But will he still be first?

While Jean-Luc was serving his ‘time-out’ in the penalty box south of the 20°N parallel, 2nd placed Dutchman Mark Slats was powering northwards through the SE Trades at more than 5 knots and by 08:00 UTC today, had closed the difference in ‘distance to finish’ to within 417 miles. Worse for Jean-Luc, the NE Trade winds have disappeared and he is likely to be facing the frustration of calms until Wednesday at least, while Slats continues to make strong gains.

The weather map below shows the blue area of calms blocking the path of Van Den Heede and his yacht Matmut and the narrow band of north-easterly winds coming off the African coast, which Slats and his rival Rustler 36 Ophen Maverick are striving to reach. This creates a big opportunity and sets the scene for a tactical battle with the wind gods playing their part during the week ahead. Slats is currently making 5.0 knots and this is likely to continue until he reaches the same 20°N latitude where Jean-Luc is sitting. From then on it will simply be a case of powering into the NE Trades up to the Bay of Biscay, which could also spring more surprises before the finish.

A pretty frustrating day! I did not get any wind at all. I was stopped for several hours, until midnight yesterday while listening to a book ‘The foreign student’. I did not make even 20 miles.

Since then, I found a little wind, it’s not crazy speed but at least I advance, and at least I’m sailing with the windvane. I am in a very difficult area where normally the trade winds are well established in January. I can tell you that they are not established at all. I do my best to go north, I hope that next week the weather conditions will have changed, that I will have good speed, and that I will be able to charge my batteries.

The two skippers are racing identical Rustler 36 designs, but Matmut carries a smaller rig and mast damage, which Jean-Luc does not want to overpress. Ophen Maverick has the benefit of a larger sail plan, but after 25,000 miles, she beginning to show signs of wear which could lead to breakages. These final 2 weeks promise to provide a nerve-racking finale.

One man with his money still firmly on Jean-Luc is French weather guru Jean-Yves Bernot. Writing on the Voiles et Voiliers site, he sums up the situation:

The coming days are not going to be very funny because it is a lot of starboard tack work and Jean-Luc will lose half his lead. That said, this is not really a problem for him. These venerable boats are not very fast; it takes a lot of time to regain ground. At best they cover 140 miles a day and VDH still has a good cushion.

We are in a classic situation, with a Azores anticyclone in its place and the route that passes to the west of this archipelago. There, in the Azores, you hope to find a depression to carry you home on south-westerly winds. For VDH the wind will be weak and unstable from Monday to at least Wednesday. Meanwhile, yes, his Dutch comrade will make up a lot of ground; maybe 300 or 400 miles to roughly half of his lead. But then, there is no situation where one would miss a weather phenomenon beneficial to the other, and Mark Slats will slow down while VDH goes off again. That’s why I think there are no problems for Jean-Luc, even if he will moan because it is all upwind to the Azores.

Van Den Heede did not help his cause by straying north of the 20°N parallel during his 18 hours in the penalty box. The rules are very clear: On crossing north of 20° North latitude, the entrant suffering a time penalty must then return south of that latitude (when the penalty time starts) and not cross North of it again (within 40 miles of the initial crossing point) until the time penalty has been served. The entrant may then make for the finish line.

Nor should there have been any confusion with navigation. Because of difficulties with traditional means of navigation in knowing precisely when you cross a latitude, GGR HQ gave Jean-Luc a time of 00:10 UTC on Saturday 5th January to start his penalty. All he had to do was remain south of his position at that time.

He started well enough, heading SW (130°T) for two hours at an average speed of 3.67 knots, but he turned and sailed NE (317°T) for a distance of 9.9 miles which carried Matmut north of the line. The yacht remained north of the line for 3 hours.

As it happened, the winds died at the end of his 18-hour penalty period, and Jean-Luc found himself trapped behind the line for several hours more so he did in fact serve an uninterrupted 18 hours behind the line.

GGR HQ has since ruled that Jean-Luc made an unintended navigational error and had served the penalty at 21:00 UTC on 5th January. Full ruling as below:

Jean Luc VDH was allocated an 18hr time penalty on 9th NOV 2018 The course penalty rule in the GGR Notice of Race is as follows.

GGR NOR 2.5.2 Course Penalties. Time penalties allocated to an Entrant will be served in a Penalty Box (TBA in the sailing instructions). On crossing north of 45 degrees North latitude, the Entrant suffering a time penalty must then return south of that latitude (penalty time starts) and not cross North of it again (within 40 miles of the crossing longitude),until the time penalty has been served. The entrant may then make for the finish line.

The Penalty Box latitude was subsequently lowered to 20 degrees North on the 21st DEC 2018 for safety reasons, due to the anticipated early arrival of yachts at 45N. To allow for lack of precise positioning by entrants, an agreed START TIME is set close to that latitude. At that START TIME while the entrant is sailing north, that position then becomes the target latitude for the PENALTY BOX and that time/position marks the East West Latitude ( Boundary line) of the PENALTY BOX and the entrant must stay SOUTH of that PENALTY BOX Boundary while serving time

3. In the next two hours he sailed fast to use his water generator and sailed an average course of 317T for 9.90 miles ( Average 5.95kts. He did not realize he crossed over North of the line just hours after leaving it)

4. For the next three hours JL VDH sailed an average course of 116T for 5.85 miles (average speed of 1.95kts to meet the Boundary)

6. The penalty time is only applicable when South of the line.

7. In a later explanation to JL VDH, he agreed he was North of the line.

8. JL VDH was advised to remain below the line for a total of 18 Hours.

9 JL VDH wanted the 3 hours North of the line to be included in his penalty time and requested a review.

10. JL Departed the PENALTY BOX at 2100UTC 5th January 2019 with the approval of GGR acknowledging the request for review to be addressed in a timely manner.

A. GGR Does not agree that time North of the boundary is part of the penalty time.

B. GGR Agrees that JL VDH made an unintended Navigational error.

C. GGR Notes that JL VDH made the effort to remain in the PENALTY BOX for the required 18 hours South of the line ( Not including the time North of the line)

D. GGR Accepts that JL VDH was approx. 10 minutes short of the 18 hour requirement, but the effort to remain inside the Penalty box is in the Spirit of the GGR.

E. GGR will NOT issue any time CREDIT to JL VDH and determines that JL VDH has fully complied with the GGR Time Penalty of 18 Hrs at 2100hrs on the 5th January 2019.

Third placed Estonian skipper Uku Randmaa and his Rustler 36 One and All, survived last week’s South Atlantic storm unscathed, and now finds himself drifting in a hole, making only 1 knot on Sunday, so has used the time to dive overboard and give the hull another clean. The forecast suggests that the winds will not return until later today – and then from the north! His climb up towards the Equator will not any easier than it was for the two leaders but at least temperatures are warming by the day.

Surprisingly, Istvan Kopar, who rounded Cape Horn on December 1, has made most progress of all during the past 5 days, but now head winds have become his new reality and Puffin’s VMG has dropped to 2.8 knots today.

Also surprising is the 5.1knots recorded by Tapio Lehtinen’s Finnish entry Asteria. She is covered in barnacle growth, which is sapping her speed at an ever-increasing rate. Last week, GGR HQ lifted the restriction of the NO-GO ZONE south of the 42°S Parallel in the South Pacific as a safety measure for Lehtinen to escape the worst of a Southern Ocean storm running up behind, and Tapio has been running before strong NE wind towards Cape Horn ever since.

Ever the humourist, Tapio messaged Race HQ on 5th January: ‘CAN I GET 2 THE GUINNESS BOOK OF RECORDS 4 THE SLOWEST TIME ROUND THE WORLD?’

This had set us thinking: Has there been anyone slower than the time of 312 days set by Sir Robin Knox-Johnston 50 years ago?

The distance to finish between his Suhaili and Asteria in this virtual race played out on the YB Tracker is down to 512 miles. Five days ago, Asteria’s lead was 690 miles, so the record could yet be won by Lehtinen.

Plans are moving forward to salvage Irish GGR skipper Gregor McGuckin’s yacht Hanley Energy Endurance. Cody Cordwainer, a tugboat captain operating out of Brooklyn Navy Yard is set to arrive in Perth, W. Australia on January 16 and charter a fishing boat to take him and his crew to collect the yacht, now some 1,100 miles to the west of Fremantle. Cody is posting all news on Facebook.