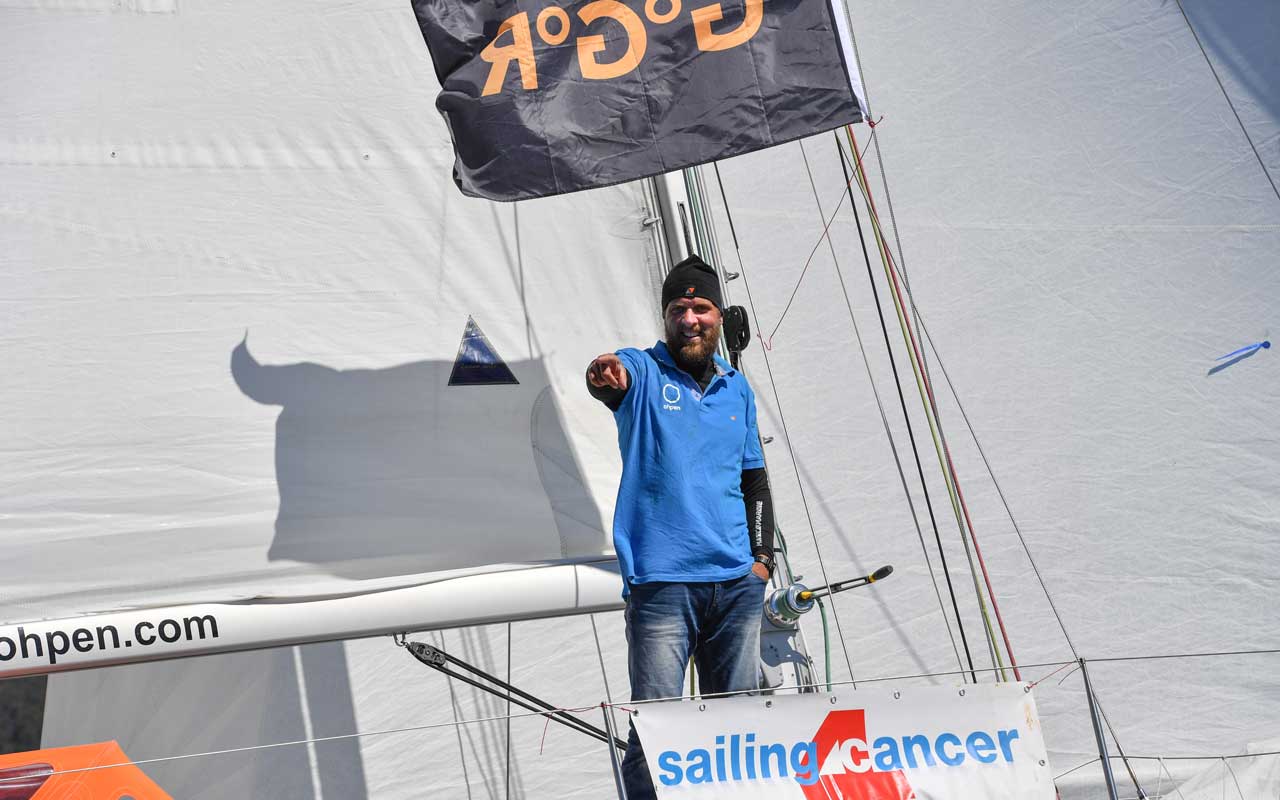 Mark Slats rounded Cape Horn just before 06:00 UTC on Saturday 2nd December, 8 days behind race leader Jean-Luc Van Den Heede, having narrowed the lead by 351 miles over the past 7 days.

The 2nd placed Dutchman is now within 1022 miles and needs to average 0.75knots faster to finish back in Les Sables d’Olonne at the same time.

This takes account of the 18-hour penalty that Van Den Heede must serve before crossing the line for using his satellite phone for non-safety purposes after suffering mast damage to his Rustler 36 Matmut four weeks ago. Since then, the 73-year old Frenchman has climbed the mast five times to check repairs, which he says are holding up well. But while he has no qualms about pushing the boat when the wind is aft of the beam, Jean-Luc says he must ‘nurse’ the rig upwind to avoid the boat from slamming and sending shockwaves up the mast.

Shortly before rounding the Horn, Slats said he is now going all-out to win, pushing his Rustler 36 Ohpen Maverick as hard as he can. Van Den Heedecan only push as hard as he dare, hoping his lead will be sufficient. He says his priority is simply to finish without breaking his mast. The gap is likely to narrow further during the next 24 hours as Mark enjoys good favourable winds and current up the western side of the Falklands and Jean-Luc has to deal with a small intense low pressure system that has formed 65 miles ESE of him. His challenge is to stay in the favourable WNW quadrant as the storm heads NNW generating 50-55 knot winds.

Perhaps the greatest advantage Slats has over Van Den Heede is the ability to go where he wants, while the Frenchman must try to keep the wind aft of the beam. Ohpen Maverick is the faster boat upwind anyway, having the advantage of bigger hanked headsails without the weight penalty that Matmut carries with her roller furling systems. This tactical advantage alone could save Slats a week.

In a message to Race HQ today, Jean-Luc was in good spirits and predicted an ETA back to Les Sables d’Olonne on 23th January giving him an elapsed time for the circumnavigation of 206 days. That compares to 312 days set by Sir Robin Knox-Johnston 50 years before.

The race for 3rd place remains equally tense with very little give or take between Uku Randmaa’s Estonian Rustler 36 One and All and Britain’s Susie Goodall sailing another Rustler DHL Starlight. During the past week, the gap has narrowed by 35 miles. Both have issues. Randmaa has still to clear all the barnacles from the bottom of his boat, and Susie Goodall is short of fresh water. Randmaa managed to collect 25 litres of rain water last week, but being 367 miles astern, Goodall is not in the same weather pattern and her buckets remain dry. In a report to Race HQ today, Susie admitted that she is now down to her last 20 litres of water and runs the risk of running out of food in a month’s time because her remaining supplies are all freeze-dried, which require water to re-hydrate. ‘Its been a frustrating week!‘ she emphasised.

Fortunes could change more dramatically for one or other in a few days, for a storm is heading their way. The forecast is for very unstable conditions, which could give Randmaa and Goodall very different winds. Both may head a little north to avoid the worst of what is forecast to reach 55knots, and their relative positions could be very different in 7 days time.

American/Hungarian entrant Istvan Kopar has been one of the losers, having dropped a further 312 miles behind the race leader this past week. Plagued by steering issues aboard his Tradewind 36 Puffin, he is now looking to fabricate new bearings to replace those breaking up inside the gearbox on his pedestal steering, which could take weeks of effort. He is also desperately short of water, with supplies down to 16 bottles, a 6-pack of beer and 10 litres of badly tainted water in his ‘fresh’ water tank. During his film stop in Hobart, Istvan said of his tanked water – ‘You wouldn’t want to drink it!‘ but perhaps he will have to.

The biggest loser this past week has been Finland’s Tapio Lehtinen back in 6th place who has been facing stiff head winds ever since rounding the southern tip of New Zealand two weeks ago. This week, his barnacle encrusted Gaia 36 Asteria lost a further 561 miles on the leader. Today she was heading NW – 120° away from her optimum course, unable to make any headway towards Cape Horn. Lehtinen may see an end to this nightmare on Wednesday when the winds are due to swing back to the west again, and calms predicted later in the week, may give him the opportunity to dive overboard and scrape the barnacles off the boat.

Australian Mark Sinclair and Russian skipper Igor Zaretskiy, heading for Adelaide and Albany respectively to haul out and scrub barnacles off their boats, should arrive at their new destinations this week. For Sinclair, 135 miles SW of his homeport at 08:00 UTC today, the Australian couldn’t have cut it finer. He is now down to his last 6 litres of fresh water – 2 days supply. Both will be relegated to the Chichester Class for making one stop, leaving just 6 or the original 17 starters competing in the Golden Globe Race.

Race HQ has received a number of alerts from other sailors and the media during the past week, suggesting that GGR skippers are receiving daily position reports taken from the Live Tracker and broadcast over the HAM radio net to save them from navigating by traditional means.

GGR entrants can receive any information over the HF SSB radio that is free to the public (except ROUTING). HF radio is encouraged for safety and logistic reasons just as it was in the original 1968/9 Race. Race organisers do not co-ordinate or manage any HF Radio scheds. Entrants are free to join any Government or private maritime network, or organize their own HAM radio net.

Occasionally, entrants have been given GPS positions taken from the GGR Live Tracker, which gives precise latitude and longitude co-ordinates. This had been allowed under the GGR rules. Skippers are interested in where they are in the fleet and where other entrants are etc. This however, has led some followers to believe that entrants are not navigating with a sextant any more, which is NOT the case.

To receive positions from the GGR Live Tracker on a regular basis is against the spirit of the GGR and to save any confusion, the following new rule came into force on Dec 1st.