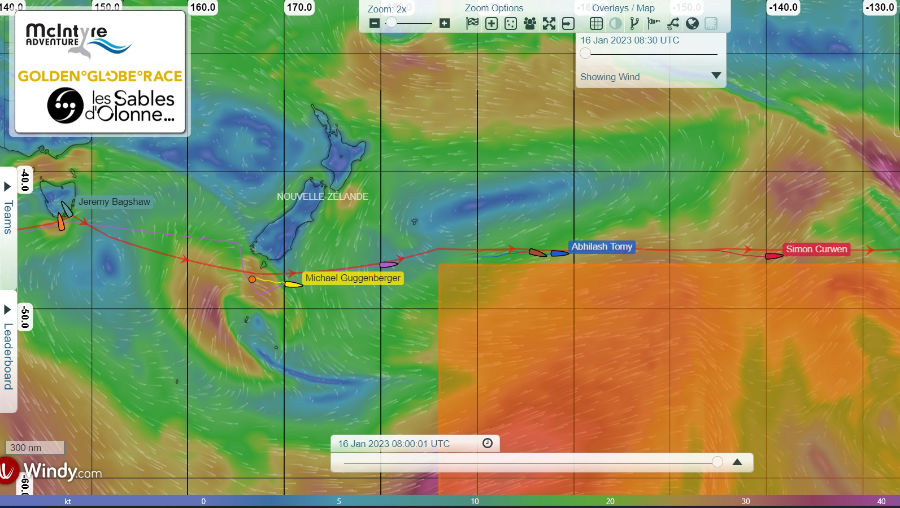 Land for Jeremy this morning who alternated between calms and squalls to land in Hobart this morning. Olleanna, plagued with barnacles and short of water, went straight to King’s Pier Marina to moor. Jeremy will, like Guy in Cape Town before him, lift the boat, clean the hull, antifoul, get food and water before setting off again in Chichester Class. Jeremy has been fighting hard to stay in Suhaili Class but the important thing for him is to finish his round the world voyage.

To his west, the elastic is getting longer again for Ian, who had reduced the gap down to 40 miles yesterday but hasn’t moved much overnight, now more than 70 miles from Jeremy this morning. Elliott is now only 110 miles from Cape Leeuwin, which he will pass tomorrow from S to N rather than from W to E, but that’s still 2 out of 3 great capes! Guy, settling just under 44°S, is also alternating between calm and breeze, this morning it is rather breezy: 7 knots average for Sagarmatha!

To the east, it’s still complicated for Cpt Gugg, 300 miles from the Bounty Islands, who got a front this morning but will have little to no wind tomorrow and Wednesday. Kirsten and Abhilash are pushing with a slight speed deficit for K. but no longer bleeding miles on Simon who is not dragging his feet at 150 nm/24h this morning. Unfortunately they will both be slowed down mid-week by the high pressure to their north extending over them.