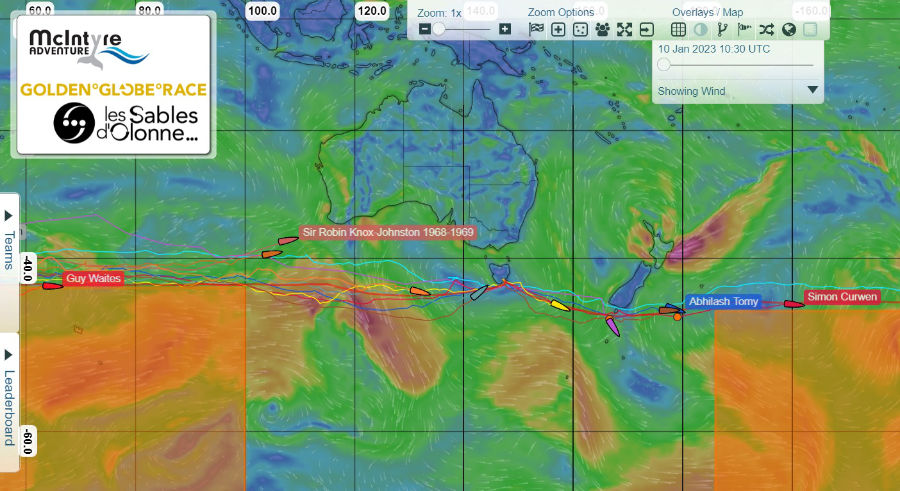 Some go, some don’t

The second half of the fleet in the Southern Indian Ocean has slowed down this morning, but still has some wind, notably Guy who is flirting with 44°S and is picking up some southerlies, and Elliott still clocking his daily 100+ miles at 90° in a light south westerly flow. He has not yet gybed and is slowly going up, maybe tomorrow with the NW rotation?

Ian is the fastest this morning in the southern Indian Ocean at 130 nm/day, and will take advantage of the front tonight to further catch-up with Jeremy who has to put some north in his route towards Hobart. The light conditions are not ideal for the remaining 250 miles, but the sea will flatten out considerably over the next few days, perhaps a good opportunity to check out Olleanna’s hull?

Up front everyone is finally back to speed, between 5 and 6 knots, thanks to the low-pressure system forming to the north of New Zealand: south 15 to 20 knots for Gugg with the sea in the right direction, north 15 knots for Abhilash and Kirsten with a rougher sea, but who cares, they’re making progress! Simon is still the fastest in the lead group, but he is no longer escaping brazenly. He will be slow today with the high pressure catching-up.