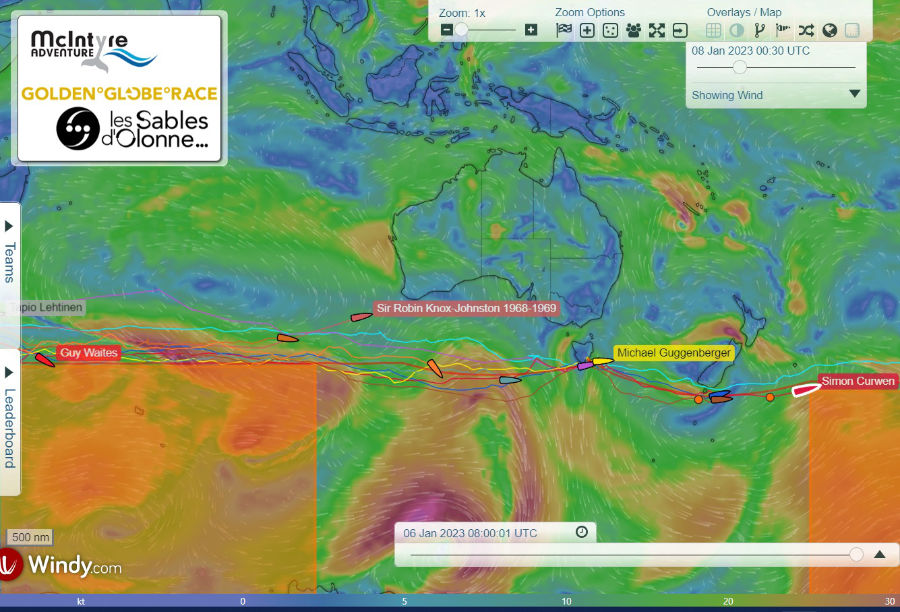 We talked about it for a few days: Guy Waites is still the fastest in the fleet this morning. Not only did he improve his 24-hour record, beating the other Tradewind Puffin by 3 miles, but also his 7-day record, as well as the 4 hour average. Obviously, the Briton is very late for Hobart, 3900 miles away, but damn, days like this give you hope he makes it in time!

Up-front, out of the exclusion zone, everyone has wind and is making most of it. Elliott is back to 5 knots average on a Second Wind that is decidedly fast for its size and low sail area, Ian is in his Epiphany low-pressure eating Xmas cake, gaining on Jeremy who will be hit by the low later today. Capt. Gugg is favouring a short route to windward, north of the high, creating apparent wind but in a confused sea state.

Ahead, Abhilash and Kirsten, tightly packed together, finally got fresh wind from the south, but facing waves from the north… definitely faster but still uncomfortable. In the lead, Simon has passed the antipodes, at 174°W west, 600 miles from his pursuers. He gained in the South Pacific a good chunk of the lead he lost in the Hobart arrival!