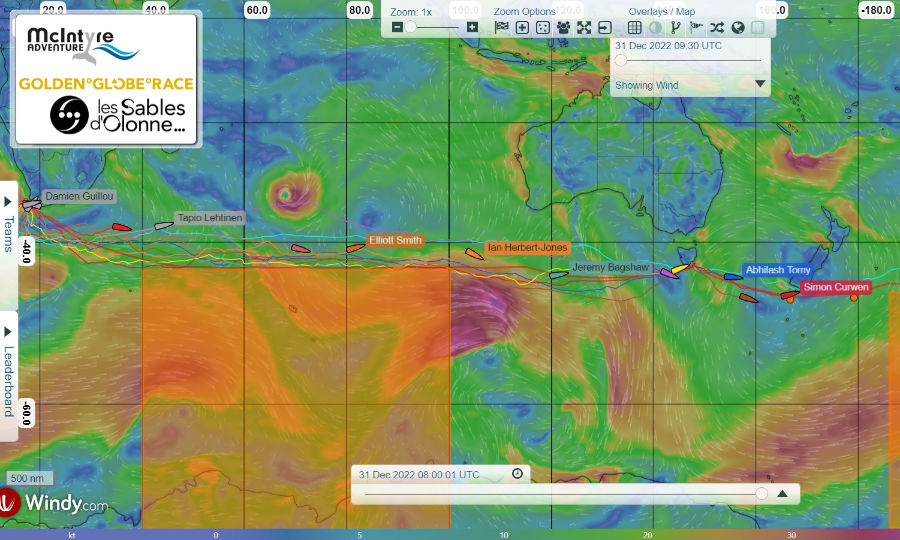 Progress is still slow down at the back of the fleet for Guy and Elliott who are in their respective (windless) bubbles. The situation should improve for the British sailor tomorrow with a front in his south, but not for the American, who goes from calm to stormy weather. He was informed of a low-pressure system passing over his route on January 2.

Ian gybed yesterday and is making way on a southern route, back into a more usual pace at 116 miles this morning. Jeremy has received a gale warning and is preparing for his New Year’s gale, after last week’s Christmas gale, he doesn’t yet know he will get another one for the Epiphany!

In front of Tasmania, Capt Gugg is also becalmed but still making some progress with an average speed of 2.7 knots this morning (65nm/24 hours), he has another 100 miles to go to the Storm Bay gate and will get some wind tomorrow.

At 166°E, the longitude of the Snares Islands, Simon has succeeded exiting the Tasman Sea in a dominant position: he gets the benefit of the coastal effect giving him fresh wind while Kirsten is stuck in the high pressure. The Briton gained 60 miles overnight over the South African sailor.

It is Abhilash however who is best in the fleet this morning, sailing north of the high pressure: with 145 miles covered, he is the only one to make up ground on Simon! He will also be slowed down tomorrow, before getting fresh wind for all three on Monday.