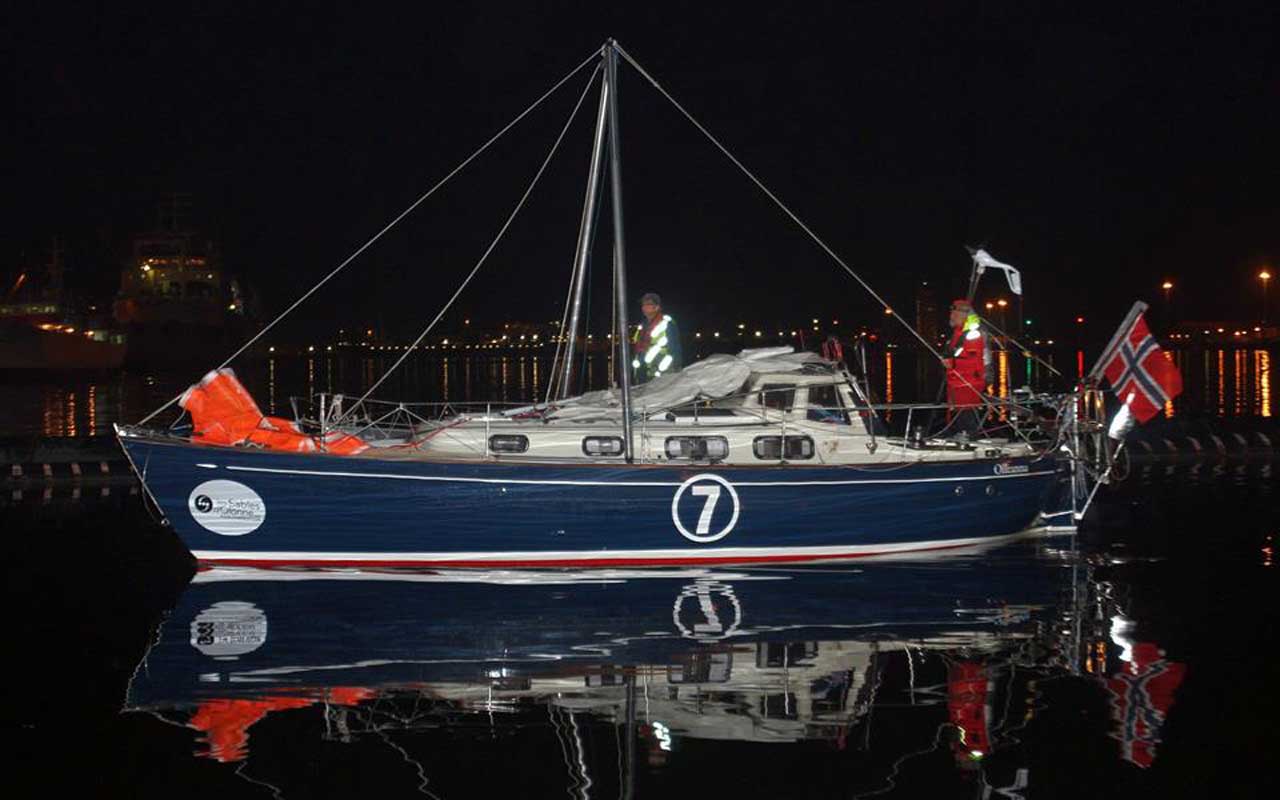 Are Wiig, the Norwegian GGR skipper dismasted 8 days ago after his OE 32 Olleanna was rolled through 360° in the Southern Ocean, arrived in Cape Town at 21:06 UTC on Sunday, having sailed the 400 miles under jury rig with no outside assistance.

Peter Muller, one of the Capetonians to have waited up to welcome Wiig when he docked at the Royal Cape YC yesterday reports:

His boat took a hell of a beating. The mast had broken in at least two places and the pieces were lashed down on deck. She had a cracked deck and popped porthole. Are said that the cracks and damage on the starboard side went right through the boat. He had only seen this type of damage before in his work (as a yacht surveyor) when boats had fallen over onto concrete when stored on land.

Recounting the fateful episode, Wiig said he was hove-to at the time and had just started repairing his self steering for the second time in two days. He was standing in the companionway working on repairing a part in the vice mounted on the top of the companionway. There was no warning. The boat got lifted up on a big wave and then dropped down.

Olleanna also suffered a bent pushpit and had only partial steering. Wiig managed to fix the self -steering and used it with his jury rig so that he could get some sleep. His main fuel tank was contaminated and he only had 15 litres of diesel in day tank, which gave him 20 hours of slow motoring.

But Are was well, with no complaints, was very factual and friendly. What a person!

Wiig also said that he was very glad that he had built and trialled his jury rig system utilising two spinnaker poles before departure – a race requirement for all competitors – and praised the Yellow Brick satellite tracking system which gave Race HQ his position each hour and was used to send and transmit text messages between the boat and Race officials. ‘It was good to know that people watch out for us’, he said.

Another useful piece of compulsory kit was the emergency Echomax inflatable radar reflector, which Wiig set up at the back of the boat after the dismasting. This helped a passing ship locate Olleanna a few days before her arrival in Cape Town. Wiig politely declined the Captain’s offer of support, and made it to port unaided.

This was a great display of seamanship. Harbor Master Steve Bentley has been extremely helpful in monitoring Are’s progress and arrival, and The Royal Cape Yacht Club has been very welcoming. Many people are looking forward to hearing a report from Are about his experiences.

Another to make port safely yesterday, this time on the opposite side of the South Atlantic, was Frenchman Antoine Cousot who arrived in Rio de Janeiro under full sail but nursing shoulder and foot injuries sustained while attempting to change headsails on the bouncing foredeck of his Biscay 36 ketch Métier Intérim. The indication is that if he does this again, it will be with furling headsails rather than hanked sails.

Carozzo sailor Francesco Cappelletti who missed the start of the GGR by 21 days and has been following the fleet for the adventure, is now following in Cousot’s wake to Brazil after the Italian reported last week that the self-steering wind vane on his Endurance 35 007 had broken. He has the same Beaufort Lynx wind vane that cost Palestinian entrant Nabil Amra and Frenchman Philippe Péché their races after weld failures on the vertical articulating arm proved unrepairable at sea.

At the front of the fleet, French veteran Jean-Luc Van Den Heede continues to belie his age (he turned 73 last month) as his Rustler 36 Matmutcontinues to steam ahead of the fleet. This morning she has a 900 mile lead over Dutchman Mark Slats rival Rustler 36 Ohpen Maverick. In an area of the Southern Ocean where you expect westerly winds, Slats reported this morning HEADWINDS AGAIN 20 [knots from the] EAST. UNREAL THIS. WHERE ARE THOSE WESTERLIES?

In his weekly conversation with Race HQ, Slats, like Cousot, said that he rued not having roller furling headsails. Now down to 38°S and on a SSW heading, the wind chill factor takes air temperatures well below freezing. Without gloves (Slats realised he had left them behind two weeks ago) hanked sail changes have to be performed with bare hands. Head winds apart, this could be why he has been losing ground to 3rd placed Irish skipper Gregor McGuckin’s Biscay 36 Hanley Energy Endurance and Uku Randmaa’s Rustler 36 One and All. During the past week, Gregor has closed the gap by 160 miles and the 4th placed Estonian, who found that he set sail without tea, coffee and a hat, is 86 miles closer.

By contrast, this morning’s tracking data shows Jean-Luc Van Den Heede making 7.1 knots in the right direction and a run of 128 miles over the last 24 hours. Jean-Luc is now predicting October 3 as his ETA at the BoatShed.com film drop off Hobart.

The other big winner today is Indian Abhilash Tomy sailing his Suhaili replica Thuriya. He was making a remarkable 10.1knots having covered 194 miles during the same period. This is the best distance recorded so far, helped by a 3.1knot westerly current.

If there are winners, there have to be losers too, and this week that award goes to Britain’s Susie Goodall sailing the Rustler 36 DHL Starlight. Caught up in a high pressure system west of the Cape, she has lost almost 800 miles on boats that 10 days ago were quite close. They went south while she went NE. At least she is back in the game now, having made 116 miles in the right direction overnight.

American Hungarian Istvan Kopar sailing the Tradewind 35 Puffin, will also be buoyed with his performance of late. He dropped to the back of the fleet after stopping in the Cape Verde Islands to repair his wind vane self-steering. Last week, he overtook last placed Australian Mark Sinclair and his Lello 34 Coconut and today is challenging 7th placed Frenchman Loïc Lepage in his Nicholson 32 Laaland. Lepage looks to be heading straight for Cape Town to replenish his water supplies and repair his SSB radio before heading into the Southern Ocean, so Kopar, trailing just 9 miles behind Laalandtoday, could be in mid-fleet position by this time next week – if he can fix his self-steering again. In a message received today, Kopar texted: MY SELF STEERING LEFT ME ALONE AGAIN IN A NASTY STORM DURING THE WEEKEND!