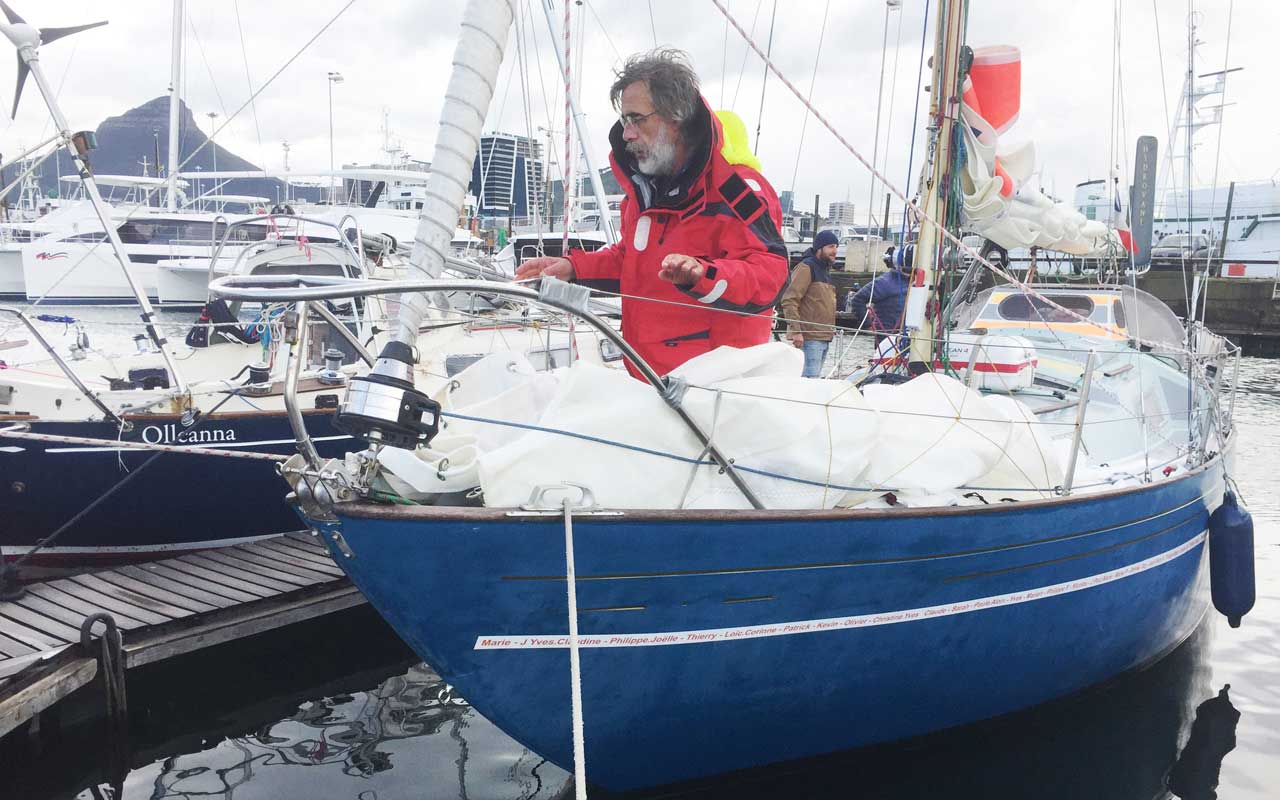 As Jean-Luc Van Den Heede continues to set the pace across the South Indian Ocean, fellow Frenchman Loïc Lepage docked his Nicholson 32 Laaland in Cape Town, and Finland’s Tapio Lehtinen surprised himself and American/Hungarian Istvan Kopar by meeting up in mid-ocean.

73-year old Van Den Heede and his Rustler 36 Matmut now have a healthy 7-day lead over Dutchman Mark Slats whose rival Rustler Ohpen Mavericklost a further day on the leader this week. He now has Ireland’s Gregor McGuckin (Biscay 36 Hanley Energy Endurance) within a day’s distance behind after the Irishman clawed back 4 days this past week. India’s Abhilash Tomy sailing Thuriya, a replica of Sir Robin Knox-Johnston’s Suhaili, winner of the first GGR 50 years ago, has also made big gains, overtaking Uku Randmaa’s Estonian Rustler 36 One and All at the weekend and move up to within a day of McGuckin.

This is fantastic…and just what I had hoped when conceiving this adventure three years ago. Now we have a Biscay 36 and a Suhaili replica chasing 2nd place which shows that any boat can win. It is all down to the skipper and their preparations. Jean-Luc’s lead is a product of very careful planning, preparation and execution born from five previous solo circumnavigations. He is showing that age is not a factor. By contrast, Mark Slats, who reported last week that he experienced the worst seas so far, is slowly losing his advantage, probably because of one decision – choosing to sail with hanked headsails rather than furling gear.

Igor Zaretskiy has been in a war zone too. The Russian requested medical advice last week after being thrown across the cockpit of his Endurance 35 Esmeralda and crashed against the liferaft. He was worried that he might have broken a rib or two but in stoical fashion, had no thought of stopping.

It’s blowing 25 knots for the third day in row, sometimes 30, and the waves are now 4m high. At times an abnormal wave hits us on the beam sending everything flying across the saloon. It’s a total mess inside. I’m tidying up every evening just to start it all over again in the morning.

Igor, who is expected to pass the Cape of Good Hope tonight, has also been plagued by the constant drip-drip of water leaking where the mainsheet track was torn away a few weeks ago, but this is nothing compared to the flooded hull Abhilash Tomy suffered twice last week. The Indian clearly had some respite yesterday, texting Race HQ: SUN APPEARED BRIEFLY LIKE RAINBOW AFTER BIBLICAL FLOODS. Whatever the problems, they are not slowing him down!

Loïc Lepage arrived in Cape Town at 14:00 UTC last Saturday to replenish water supplies and have his SSB Radio, which he relies on to pick up weather forecasts, repaired or replaced. The Frenchman plans to resume in the Chichester Class for those who make one stop, on Wednesday.

Australia’s Mark Sinclair is also planning a pit-stop off Cape Town to make an unscheduled film drop. The weather may conspire against him. Forecasters predict a big storm sweeping in on Wednesday. He and the other tail-enders have been given a weather/current alert from Race HQ saying that this storm, mixed with the counter Agulhas Current, could produce extremely dangerous seas in the area around the Cape.

On Sunday Tapio Lehtinen woke up to the more pleasant surprise of seeing Istvan Kopar’s Tradewind 35 Puffin within a mile of him. ‘WOW’ was Tapio’s response to Race HQ. The two were 360 miles south of the Cape of Good Hope and by 08:00 today, were still neck-and-neck despite Istvan reporting continued problems with his wind vane self steering.

Susie Goodall, whose Rustler 36 DHL Starlight is trailing in 6th place, has the problem, like those astern, of being a complete weather system behind those in mid-fleet. It will be almost impossible for her to regain that lost ground in the Southern Ocean and her only hope now is that those ahead make mistakes.